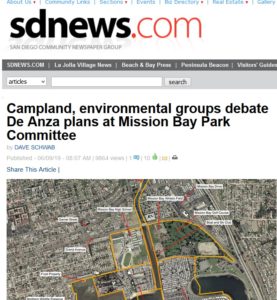 Where does stormwater go?

The short answer is “into Rose Creek.”  If you want to understand how water flows from the human built environment into Rose Creek, Mission Bay and eventually into the Pacific Ocean, check out this cool Read more…

In years gone by, the City of San Diego dredged the area of Rose Creek downstream of Garnet Avenue and the area was an earthen bottom channel. Once that stopped, about 25 years ago, natural Read more…

Over 760 pounds of trash collected at Rose Creek

What a great turnout for Coastal Cleanup at Rose Creek on Saturday, September 17th! Thank you for everyone who came out to support our amazing partners We Clean Trails and I Love A Clean San Read more…