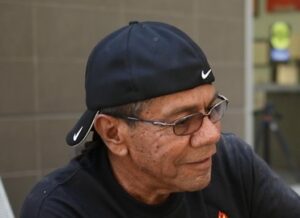 Rodriguez served as an E-5 in the U.S. Navy from 1985 to 1991. He is an enrolled member and serves as a Council Member of the Santa Ysabel Band of the Iipay Nation. Rodriguez earned a Doctor of Education degree in Educational Leadership from the University of California, San Diego and a Master of Arts degree in Human Behavior from National University.

University of California, San Diego  alumna and Kumeyaay Native Eva Trujillo  (Class of 2020) has become the university’s repatriation coordinator.           The university has had a complicated relationship with local tribes. Read more…

Who are the Native Americans behind one of the largest Casino Resorts in California? Find out in “Reserved Wealth”–an insiders look at the life and history of the Barona Indian Reservation, home to the Kumeyaay Read more…