Approximately 1,000 years ago, a Native American people called the Kumeyaay lived throughout what is now San Diego County and Baja California. During that time, the Pauwai Valley was occupied by hundreds of Kumeyaay-Ipai living off the land. The Ipai were a linguistic division of the Kumeyaay living in the northern part of what is now San Diego County. The Kumeyaay were still in Poway until the early 1900s. The evidence of their lives and work can be seen today at the Kumeyaay-Ipai Interpretive Center, founded by a partnership with the Friends of the Kumeyaay, the San Pasqual Band of Indians, and the City of Poway. 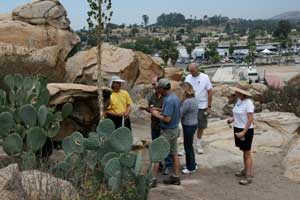 Tour of Interpretive Center from Friends of The Kumeyayy website.

Learn more at the Friends of The Kumeyaay website.