Did you know that the non-profit that puts on the annual Earth Fair in Balboa Park is in the Rose Creek Watershed?  San Diego EarthWorks have been an integral part of the work being done by the Friends of Rose Creek since 2004 and before. 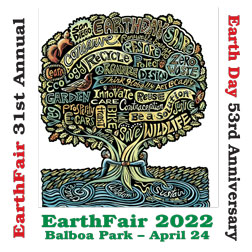 San Diego EarthWorks got its start in 1989 as the San Diego Earth Day Coalition. With the pending 20th anniversary of Earth Day in 1990, a number of local environmental organizations decided to sponsor some local events. Among them was to be an environmental fair held in Balboa Park. When Chris joined the planning group in late 1989, the expectation was that we would have a couple of dozen exhibitors and maybe a few thousand visitors. It was a real surprise when the Mayor’s office offered the opinion that we would probably get 20,000 or more, given the media exposure that Earth Day was expected to get. This was clearly a game worth playing.

The results of that first event – EarthFair ’90 – went way beyond what any one expected: 215 exhibitors and 50,000 visitors. It was the largest event that had ever been held in Balboa Park. More than 350 volunteers participated to make the event a fabulous success. Our event was mirrored by enormously successful events all over the United States.

San Diego EarthWorks‘ EarthFair 2022 on April 24, 2022 from 10am – 5pm and needs your participation as a exhibitor, volunteer or attendee.

My Garden of a Thousand Bees

Taking refuge from the coronavirus pandemic, wildlife filmmaker Martin Dohrn set out to record all the bees he could find in his tiny urban garden in Bristol, England, filming them with one-of-a-kind lenses he forged Read more…

California Chaparral: The Most Underrated Biome