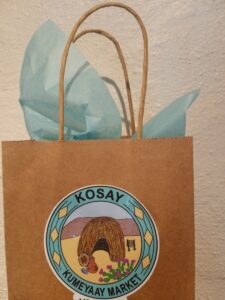 Martha Rodriguez is a dedicated community leader, and she has now opened a new store in Old Town, called Kosay Kumeyaay Market.

Kosay Kumeyaay Market has a traditional Kumeyaay house outside at the entrance and children can explore and learn. There are basketry, pottery, geography, language and culture demonstrations.

They stock traditional and artisan crafts of made by contemporary Kumeyaay and Yuman artists individuals who live both north and south of the border.

Their website is still in progress but the main page has a lot of amazing photos of the types of items they sell.   This is a great opportunity for all San Diegans to support our local indigenous community in a meaningful way.

Learn more at Kumeyaay Market, a great article on the market at Hidden San Diego, or just stop by at 85472 Calhoun St, San Diego CA 92110 and learn about the village of Kosa’aay that was the original community living here.

Ms. Rodriguez has also started a non-profit called Tipey Joa/Native Warriors. It is an international grass-roots organization of the Yuman groups that include the Kumeyaay nations that focuses upon health, education, and culture.

Tipey Joa’s mission is to promote and support social justice, health, education, and cultural/language preservation initiatives in underserved indigenous communities, regardless of the physical and political borders that separate us.